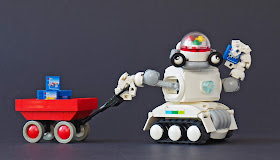 This is Huwbot, a server-roaming robot built for Brickset's contest to create a mascot of their website. Brickset is one of the most popular and useful LEGO set databases and news sites. I've given up keeping track of my collection long ago (I don't keep set built and I try to remember what parts I have) but I like checking new sets for interesting parts and recolours, and their parts database updates usually first - It's especially useful when planning LUGBULK orders.

So now they wanted models of Huwbot, which is a bot that chooses random sets of the day and runs background tasks. His appearance was not described in the rules, so I got to built whatever I wanted. I though that a robot felt natural, as it's a bot after all. I also wanted to include Brickset's logo - Yellow, green and red 1x1 plates in triangular formation - to the built, and sort of dome with the logo as the brain inside felt like a good idea, a starting point of the build. I also wanted to use ball joint mixel eyes, as they are the most amusing looking eye pieces around; They also have some mobility via ball joints. 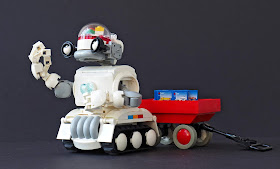 Huwbot's colour scheme is mostly based on Brickset's interface - white and clear with some light greys. Tricolours on the lower part's sides are taken from the menu bar on top of the site. There's also a Clickits heart on the chest, as Clickits are integral part of Brickset; I think they had a April fools thing about them this year. The overall shapes are round, smooth and pleasant, as "modern robots" tend to be, or have been from maybe 50s or something. Look like this felt decent for a bot; I didn't want to re-invent the wheel, just achieve Huwbot-feel with details.

The way of moving was one question - I though about legs, but as I wanted the model be sturdy (it is!), making decently mobile legs in fitting design felt cumbersome, and maybe unfitting. Personality is what was asked for, and while legs can achieve personality (in ways of stance and so on) they didn't feel especially natural for a server-roaming robot. So I went with the tracks, completed with white boat-stud hubcaps. The tracks itself can't do much to posing, but mobile neck, arms, fingers, eyes and waist enabled variety of postures from cute to dramatic. Additionally, the extra bulk of the lower section gave me space to include the aforementioned tricolours.

From the beginning, I felt Huwbot needed something extra to distinct it from other robots. A wagon, a very childish one especially, felt fitting. It gave Huwbot adorable qualities, a modern robot hauling things around in a very traditional kid's wagon. Its design is, of course, taken from Calvin's wagon from Bill Watterson's Calvin and Hobbes (which is of course The Best). Old grey tyres with simple red hubs enhance the contrast between the wagon and the bot. At first he was going to pull the server in the wagon, but that felt unfitting, as it is said that Huwbot lives in the wagon; Fortunately I managed to buy some of those 2x2 tiles with City set box stickers. So Huwbot carries some sets in his cart, to be correctly sorted to the database, or to be proposed as Random set of the Day. 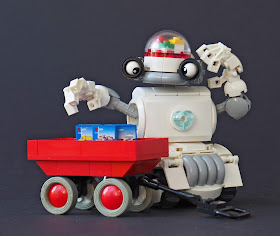 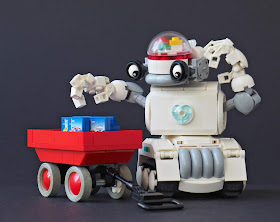 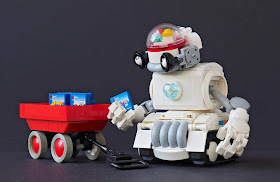